Who will be the next rising piano star in Australia?

The Australian National Piano Award announces the 11 finalists who will strive to win over $65,000 in prize money as they perform in a week of solo recitals at Riverlinks Eastbank in Shepparton from 4 – 9 October 2021. 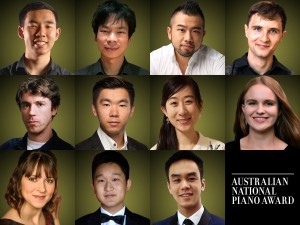 The 2021 finalists competing in the fifteenth Award are:

The new Award Artistic Director, Wendy Lorenz, explains that this year’s finalists bring a remarkable wealth of collective talent and experience, “These performers promise a feast of pianism and music making of the highest order. We will hear many of our beloved piano masterworks in the hands of these wonderful young artists.”

“Many of our finalists have performed at major festivals, competitions and concert venues across the world. We are delighted to host them in Shepparton – whether for their first time or as a returning finalist,” said Ms Lorenz.

The Award is biennial and was scheduled for September 2020. However, it was postponed to October 2021.

As the Award approaches, the Board President and Award co-founder, Darryl Coote, is feeling very optimistic, “After such a challenging and uncertain period, we are so fortunate that we can bring our Australian-based competitors together for a high-profile regionally-based piano competition held in Victoria’s Goulburn Valley.”

Each Award finalist will present two 45-minute solo recitals from a breadth of repertoire selected from the Baroque and Classic periods, the 19th and 20th centuries, as well as works by Australian composers.

Mr Coote explains that the Award adjudicators will select five performers to play in the semi-final and then three artists will compete in the grand final recital, “It’s an incredibly stimulating week of top-notch performances of interesting and exciting repertoire.”

“Unfortunately, uncertainties of international travel prevent Stephen and Timothy from travelling to Australia. Instead, we have been fortunate to engage two other Australian-based adjudicators: Amir Farid and Kristian Chong, who will join Stephanie to judge the week of solo recitals,” said Mr Coote.

“As a past-Award adjudicator, I have been totally ‘blown away’ by the way in which the Shepparton community embraces the competition as its own. There is a general sense of festivity in the air – something akin to a boutique style European festival,” said Ms Lorenz.

“We look forward to welcoming everyone who loves piano music to Shepparton this October for an exhilarating and world-class fest of piano music and brilliant performances,” Mr Coote concluded.

Tickets to the 2021 Award are available to purchase from July 2021 at Riverlinks Eastbank.

The Board and Award Artistic Director plan to announce a twelfth 2021 Award finalist.

The adjudicators had also selected two competitors currently living outside Australia for the 2021 Award: Robbin Reza (currently based in Colonge, Germany) and Joseph Havlat (currently based in London, England). Due to the uncertainty of international travel, the Board has negotiated with Robbin and Joseph that their participation in the 2021 Award will be transferred to the scheduled 2023 Award.